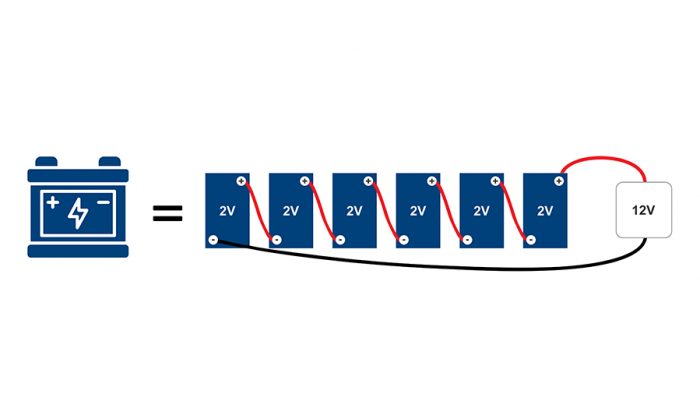 Battery Voltage refers to the amount of electric potential the battery holds and is measured between the terminals of a battery. In a lead-acid battery, a cell has an open-circuit voltage of approximately 2 volts. There are six cells in a 12-volt lead-acid battery. The standard automotive battery nowadays is a 12-volt battery. A fully charged car battery voltage is around 12.6 volts or higher.

When the battery voltage drops, its performance will be changed.

The Battery Capacity is specified as the number of amp-hours (Ah as dimension) the battery will deliver at a specific discharge rate and temperature. The capacity of a battery is not a constant value and shows decreasing trend with increase of discharge rate. The capacity of a battery is affected by many factors such as the mass of active material, density of acid, adhesion of the active material to the grid, number and area of the plates, type of separators, quantity of electrolyte, grid alloys, discharge rate, temperature, internal and external resistance, age and life history of the battery (usual cut-off voltage is 10,50 V for a 12 V battery)

The nominal reserve capacity (Cr.n) is the period of time (in minutes) for which a battery can maintain a discharge current of 25 A to a cut-off voltage of 10,50 V. reserve capacity is a general indicator of how long a new, fully charged battery can continue to operate accessories if the vehicle’s alternator fails.

Cold Cranking Amps is a rating used in the battery to define a battery’s ability to start an engine in cold temperatures. A great number of amperes is needed to start the engine, but only for a short time. The actual rating is the number of amps that can be removed from a new fully charged battery at 0°F or -18 oC for specified duration (e.g., 30 seconds while maintaining a voltage of at least 7.2 V for a 12 V battery). For an aged battery, it may no longer be able to meet its original CCA rating. The higher of CCA rating shows the greater starting ability of the battery.

The charge acceptance is expressed as the current (Ica) which a partially discharged battery accepts at specified temperature and charge voltage within a defined period (usually 0 °C and a constant charging voltage of 14,40 V)

The cycling test represents the ability of a battery to perform repeated discharge/recharge cycles. This ability shall be tested by a series of cycles and rest periods under specified conditions after which the cold cranking or the capacity performances shall be determined.

During battery operation, water is lost as a result of chemical reactions. Two main causes are evaporation and electrolysis. For a battery with a good box isolation, evaporation is a minor cause of water consumption, while emission of Hydrogen and Oxygen, as a result of electrolysis, play the main role in this case.